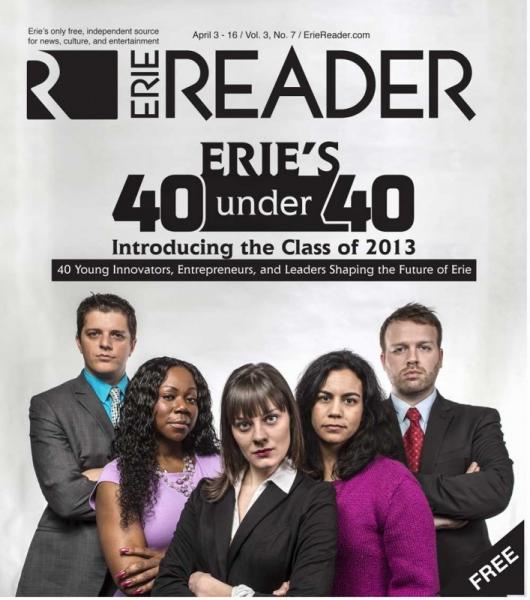 The Erie Reader, Erie's alternative, independent newspaper, recently announced its list of 40 people under the age of 40 who are making a difference in Erie.  The entire articles can be found at www.ErieReader.com or on newsstands throughout Erie.

Adam Williams was selected to be on the list, and was flattered and honored by the recognition. His portion of the article is as follows:

An Erie native, Adam earned his bachelor’s degree in management from Penn State Erie, The Behrend College and went on to complete his JD and MBA from the University of Pittsburgh. Self-employed with Rust Belt Law, Adam also practices with Shapira, Hutzelman, Berlin, Ely, Smith & Walsh, primarily focusing on small businesses. “My goal has been to become the ‘startup’ lawyer in Erie,” he said. “In the two years since I hung my shingle, I have helped hundreds of people jump through the legal hurdles to start and grow businesses, to create jobs, to feed their families, and to make Erie a better place in their own way.” Adam added that his wife deserves to be on this list more than he does, and that she could not be more supportive of his work. “There is such a diversity of passions and interests in Erie. I am constantly impressed by how people can combine professional aspirations with social welfare, all while considering the future of our great town and the direction we would like it to head. Erie is in good hands.”

By submitting this request for information, I agree that I have not entered into an attorney-client relationship and I am at this point only requesting information. I understand that I may only retain an attorney by entering into a fee agreement that will take place if and when it is determined that I have a lawsuit. Moreover, I understand that I will not be charged for a response to my questions set forth above.
Home
About
About the Firm
Meet the Team
Rates & Fees
Employment Opportunities
Services
Starting a Business
Business Contracts
Closing or Selling a Business
Buying a Business
Running Your Business
Trademarks & Copyrights
Lawsuits & Litigation
Leveraging Chaos Assessment
Blog
Blog
Newsletter
Contact