Wrapping Your Head around "Consideration" in Contract Formation 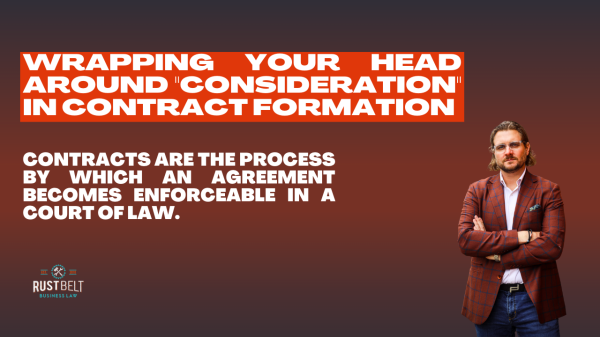 Wrapping Your Head around "Consideration" in Contract Formation

The more your business grows and thrives, the more you will deal with business contracts. Contracts are one of the main organs of your business; these tools help ensure that your product demands are met, your complaints can be addressed, and that your business relationships stay healthy. Although it's not reasonable to expect every business owner to have an expert knowledge of contracts, every owner should strive to absorb at least a minimal amount of knowledge in this area. The reason for this is because knowing certain essentials about contract law can give business owners a clear advantage in different arenas.

One of the best ways to master contract formation is to carefully analyze each of the basic elements, or requirements, which make up a given contract. Today, we're going to examine the element of "consideration" in detail.

The Elements of Contract Formation

A contract represents the completion of a series of elements; in a sense, a contract isn't an agreement per se, but rather the process by which an agreement becomes enforceable in a court of law. Contracts are exchanges of promises: one party promises to do something, or avoid doing something, in exchange for a promise to do something or avoid doing something from the other party. And, if either party fails to follow through with his or her promise, failure to perform can lead to a breach of contract, and this can lead to a remedy.

The process of converting unenforceable agreements into enforceable contracts rests on 6 elements: offer, acceptance, consideration, legality, capacity, and writing. Consideration refers to the value being exchanged between the parties; basically, a contract must have something of value at stake, otherwise the transaction isn't a genuine contract. In most cases, consideration is simple to identify and understand, but in some cases it can be a bit trickier.

Let's look at a very typical example: party A wants to hire party B to perform lawn care services on his or her property. Party A makes the following offer: party B will perform 3 separate lawn care service sessions at a rate of $150 per session, for a total of $450, payable upon completion of all 3 sessions. Sessions will occur once every 2 weeks, starting in 1 week. In this example, it's quite obvious that the consideration is the services performed by party B and the money given by party A. When both parties agree to the terms of the contract, this creates a binding agreement which can be enforced in a court of law.

Mutuality as an Aspect of Consideration

The above example is quite simple, and so it should be easy to see how consideration plays out in that hypothetical scenario. But consideration is often more difficult to pin down or conceive. One way to better understand consideration is to see consideration as being about achieving balance between the parties. If one party gives $20 to another party in exchange for a truck which has a fair market value of approximately $25,000, we can see that this transaction lacks "mutuality," or balance in the consideration exchanged. This hypothetical wouldn't be a contractual agreement at all, but instead would be a gift.

Let's consider another example. In one famous case, an uncle promised to give his nephew a considerable sum of money in the event that the nephew avoided certain vices (i.e. alcohol, gambling, etc.) until he reached the age of 21. Upon analysis, one party argued that this agreement wasn't a valid contract because the promise made by the nephew lacked consideration; the argument was that he didn't confer anything of true value to the uncle, and so the consideration lacked mutuality. However, the court disagreed, and held that a promise to avoid doing something can be sufficient consideration. Of course, business owners won't see that particular scenario anytime soon, but this past example should give us a better sense of how this concept works.

By submitting this request for information, I agree that I have not entered into an attorney-client relationship and I am at this point only requesting information. I understand that I may only retain an attorney by entering into a fee agreement that will take place if and when it is determined that I have a lawsuit. Moreover, I understand that I will not be charged for a response to my questions set forth above.
Home
About
About the Firm
Meet the Team
Rates & Fees
Employment Opportunities
Services
Starting a Business
Business Contracts
Closing or Selling a Business
Buying a Business
Running Your Business
Trademarks & Copyrights
Lawsuits & Litigation
Leveraging Chaos Assessment
Blog
Blog
Newsletter
Contact